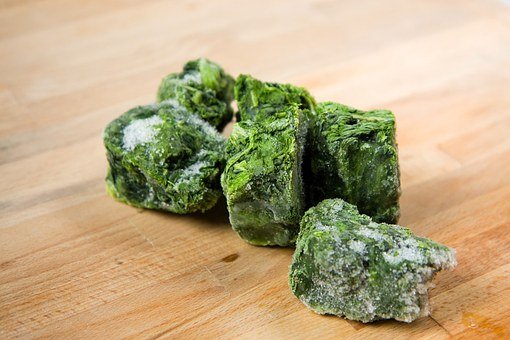 Sometimes we tend to buy more spinach than we can handle, and we need to freeze them for future use. Also, if you love spinach smoothies, soups, or sauces, freezing them is a great way to keep up with this healthy lifestyle.

You can buy frozen spinach, but if you have a garden that produces more than you can eat, then freezing spinach yourself will help save a lot of money. Furthermore, frozen spinach is ready to be added to meals, which means they are great time savers.

French spinach won't take long before it starts to become soft and mushy in the freezer. This is why it important to know exactly how to freeze spinach so it can stay for longer. If you're wondering how to freeze spinach at home, then read on to find out the simple methods. You can also use the instructions to freeze swiss chard, kale, or other leafy veggies.

How To Clean Spinach Before Freezing

1. Soak the Spinach in Water

Once you're done soaking, drain the water and rinse the spinach under cool and running water for approximately 30 seconds. If your spinach still feels dirty, you can repeat this process until they are clean.

This step is crucial if you're planning to freeze blanched raw spinach, commonly known as unblanched spinach. However, it is not essential if you're freezing puree or blanch spinach.

How to Freeze Spinach Leaves(Unblanched)

Once the fresh spinach or baby spinach leaves are clean and well dried, it's now time to pack them. To pack, fill the freezer bags with enough spinach, then remove the excess air and later seal the bags. Put as much spinach in the bags as possible because it leaves lesser room for excess air.

Some people tend to choose to store them in bins or freezer containers. However, they are not as effective as freezer bags because you won't be able to remove the excess air before sealing.

2. Storing in the Freezer

Simply put the freezer bags in the freezer and freeze spinach for a maximum of 6 months. When you need to use the frozen spinach, remove them from the freezer, then squeeze them to remove the excess moisture. You can add them during cooking dishes like stews or smoothies recipes.

In a large cooking pot, add enough water to cover the amount of spinach. Set it over medium-high heat allow it to boil.

Once the water has boiled, add spinach to the water and cover it. Then wait for two minutes to remove them from the water. You will most likely notice the water turns green while it cooks.

Place the spinach in a large bowl and then add with water and ice cubes to keep it as cold as possible. Let the spinach stay in the water for approximately two minutes. This process is important to stop the cooking process and the loss of nutrients. Moreover, it helps preserve the taste and color of the spinach.

Either use a salad spinner or a paper towel to dry the blanch spinach leaves. You can set them out on paper towels are allow them to dry for at least 20 minutes before proceeding to the next step.

5. Put the Spinach in a Freezer Bag

Stuff the spinach in a freezer bag, then squeeze to remove as much air as possible before sealing them.

Freeze spinach in your freezer bags by putting them in the freezer. The freezing spinach should last for at least nine months in the fridge when properly prepared with the steps above. You can also use frozen spinach in smoothies, food salads, and cooked recipes.

How to Freeze Spinach (Puree)

Add a handful of fresh spinach or baby spinach and water to a blender, cover then blend until the spinach breaks down into a thick puree. Avoid putting too much of the vegetables. The blender shouldn't be more than halfway full to give room for the blades to work effectively.

Another important thing to note is that you should only add enough water, not too much. However, feel free to add water in small portions if the blender is having a hard time blending the veggies.

2. Pour the Puree into an Ice Cube Tray.

Pour out the puree in clean ice cube trays and fill each compartment to reach a quarter-inch of the top. If you lack these ice cubes trays, you can also use muffin trays or candy molds. Silicone trays and molds are the best, but you can also use plastic ones.

3. Freeze them into Solid Form

5. Put the Spinach Filled bags in the Freezer.

It would be best if you now put the freezer bags of frozen spinach cubes in the freezer. You can store them for a maximum of one year. They can be added to a spinach smoothie recipe, stews recipes, and other foods while still frozen.

Can you freeze fresh spinach without blanching?

Yes, it's possible. However, if you want them to last longer, blanching before freezing spinach is the best way to go about it. Follow the instructions above to learn how to freeze spinach with and without blanching.

Freezing spinach, kales, and other leafy greens for smoothies, soup, or other recipes will not have any effect on the nutrients if you only use them within the first few weeks. You need to learn how to freeze spinach properly to maintain its nutritional value.

My name is Jason Hocky - The author of this article, I am passionate about food and good food. With my experience in cooking, I would like to re-evaluate the best with my writing, bringing it to you.

How to Make a Smoothie Without Yogurt

Best Frozen Lasagna You Need on Your Busy Work Days

Note: This post may contain affiliate links. This means if you make a purchase after clicking, I may get a small percentage of the sale, at absolutely no extra cost to you.